Q: What do you get when you leave a morris dancer alone with a pen, paper and photoshop?

A: A comic about the adventures of non traditional ceilidh woman and unconventional morris girl!

I kid you not, my awesome friend Anna created this gem for my birthday… 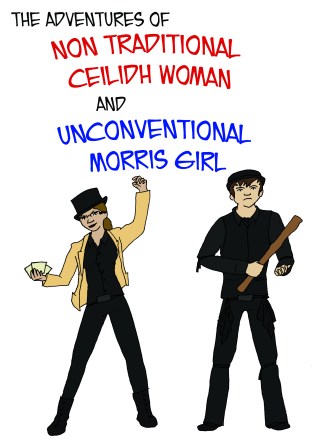 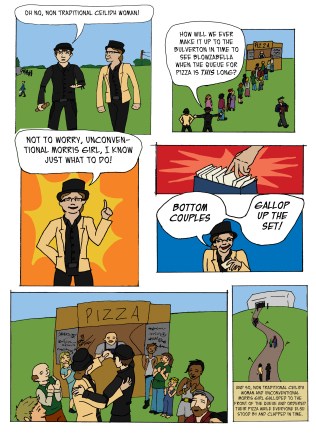 As super powers go, I think getting to the top of the pizza queue at Sidmouth is pretty handy really! In fact just getting people to spontaneously ceilidh dance on a whim sounds like fun – maybe I should try it more often… 😛

Talking of Sidmouth – I’m on the bill again this year! The first gig of mine to be confirmed is a contra-ceilidh dance at the Blackmore Gardens with the fantastic English Contra Dance Band, so I’ve been brushing up on my contra at the newly formed Sheffield Contras. They kicked off last month with the aforementioned band and Rhodri Davies calling for a really fantastic night of dancing, with more than a few dancers that were new to contra as well. There’s another one coming up on the 29th March with Andrew Swaine and The Night Before, so if you’re in the Sheffield area then make sure you get down there!

Another place that you’re guaranteed to find high energy contra dancing, akin to what you find in the States, is the Inter Varsity Folk Dance Festival (or IVFDF for short). Convenient then that a week ago today, I was at IVFDF in Edinburgh recovering from a Saturday crammed full of dancing – well worth the 6 hour coach journey. The contra on the Saturday night was definitely a highlight of the weekend with Vertical Expression, Rhodri calling and a room full of university students with more energy than you can shake a stick at!

I also got a chance to debut my new dance “the Zombie Gallop” (see my last post) at the appropriately named ‘Survivors Ceilidh’. It went down well but maybe still needs a little tweaking, although I did enjoy the mild chaos that its current form created – it seemed to be in the spirit of the dances’ theme! Oh and not to forget the Shooting Roots workshop I led on the Saturday, which resulted in a rendition of ‘the IVFDF song’ at the survivors ceilidh! I’m hoping somebody filmed it so I can post it on here at some point, but for now here’s some other Shooting Roots sounds to entertain you 🙂